A chance of hope for child refugees in Greece’s camps 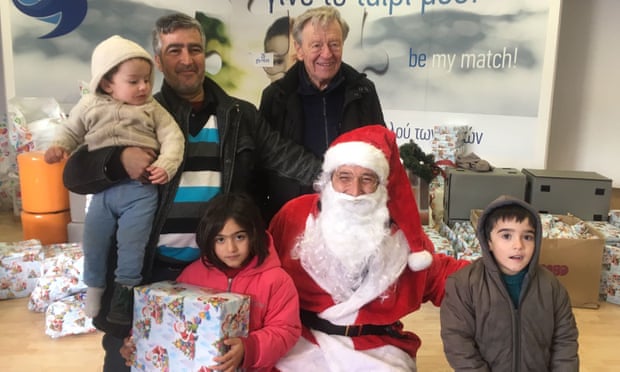 Eventually the chairs and tables had to go, chopped for firewood as the temperature sank further below freezing. It was new year in northern Greece and inside Thessaloniki’s Softex refugee camp, the wooden furniture that refugees had assiduously made to provide some comfort was sacrificed to help them survive another night.

About 66,000 refugees are stranded in Greece, of whom an estimated 26,400 are children, mostly Syrian. No one knows what 2017 holds for these youngsters, where they will end up or what language they must learn. But as winter’s numbing cold is replaced by summer’s mosquitoes, they will probably remain in situ, trapped between worlds.

Last Friday, Labour peer Alf Dubs, who last year forced the UK government to accept more unaccompanied minors, arrived in Thessaloniki to visit the city’s emergency refugee camps and immediately felt despair. He saw babies crawling on frost-crusted paths, and families shivering in flimsy tents. One volunteer told him how 60 Syrian families had been found surviving in an apartment block beyond Thessaloniki airport. Their only support was cash cards to access state handouts. The nearest shop was an hour’s walk away.

Dubs, who was brought to Britain from Czechoslovakia in 1939 as part of the Kindertransport project, predicted during a visit to the Calais “Jungle” camp last August that the squalor he saw would induce nightmares.

Speaking on Friday as the afternoon temperature sank to -4C, Dubs said it was the slow suffocation of hope, evident in the hollow stares of the children he saw, that this time had left him crushed. “I thought the Jungle was bad enough, but the lack of hope here is more depressing than anything I saw in Calais. Conditions in the camps can be horrific. Parents should not have to burn furniture in order to keep warm in sub-zero temperatures.”

In April, Dubs drove through an amendment to the Immigration Act committing the UK government to helping some of the estimated 88,000 child refugees believed to be travelling alone across Europe. But ministers appear reluctant to honour the deal. Around 2,300 unaccompanied child refugees are currently in Greece, of whom at least 300 are confirmed as eligible to come to the UK under the Dubs amendment. So far, not one has been allowed entry. Eight months after Dub’s famous victory, charities say the actual criteria under which children would qualify have not even been published.

Dubs refuses to accept the status quo. Accompanied by volunteers from Help Refugees and Safe Passage, two organisations whose prodigious efforts have helped protect and resettle hundreds of child refugees in the UK, Dubs last week met Greek ministers and government officials to try to kickstart the movement of children from there.

More tangible was the way the visit of Help Refugees, Safe Passage and Dubs succeeded in lifting spirits. On Friday, they travelled to Thessaloniki’s Asterókosmos fair to present a belated Christmas for 1,300 Syrian refugee children under the age of 12. Organised by Help Refugees, their Greek partner organisation Intervolve and the country’s ministry of migration, children gathered from the dozen refugee camps in and around the city.

The youngsters and their families spent hours on fairground rides, ice-skating, driving dodgems or enjoying arts and crafts sessions before meeting Father Christmas to receive a gift their parents had specially chosen for them. For a few, fleeting hours the monotony of life in the cold, drab camps was forgotten.

Help Refugees volunteer Tracey Myers told how one Syrian mother hailed the day as the best her child had enjoyed for six years: “Another said they had been able to forget where they were and why. Then there was the mother who thought her child might actually sleep well tonight. To see the wide eyes, the bright smiles and insuppressible enthusiasm of the children on seeing the fair – they were beside themselves with excitement.”

Dubs, who helped Father Christmas dish out gifts to the children, added: “It was fantastic to see hundreds of refugee children having the time of their lives, a real change from the depression and terrible conditions of the camps.”

Chloe Kousoula of InterVolve, which works with Help Refugees to distribute emergency food and clothing, noted how the majority of children could barely believe their luck when initially confronted by the fair. “They kept asking: ‘This is for all of us? We can go everywhere?’.”

Josie Naughton, co-founder of Help Refugees, appreciated the day’s joy was largely because it was so different from the norm. “As the cold kicks in, and the camps remain particularly hard places to survive, everyone knows there is so much to be done to meet basic needs.”

The year ahead promises to be gruelling for the continent’s child refugees, stateless and increasingly unwanted as anti-immigrant rhetoric engulfs Europe. With the EU deal with Turkey potentially on the verge of collapse, their numbers may also rapidly swell.

For now, more immediate factors are at play. On Saturday temperatures fell to -9C in Thessaloniki, and Naughton is keenly aware that 1,000 unaccompanied child refugees are currently homeless, forced to survive on the city’s streets.

Her task is to find them sanctuary while Safe Passage presses ahead with its ambition to ensure another 1,000 unaccompanied child refugees make it to the UK.

Dubs openly wonders what might have happened had the two organisations not existed. “In many instances Help Refugees and Safe Passage are the only NGOs doing something positive for refugees, as particularly large charities seem to be keeping away from this most pressing of issues.”

The article was published to : www.theguardian.com