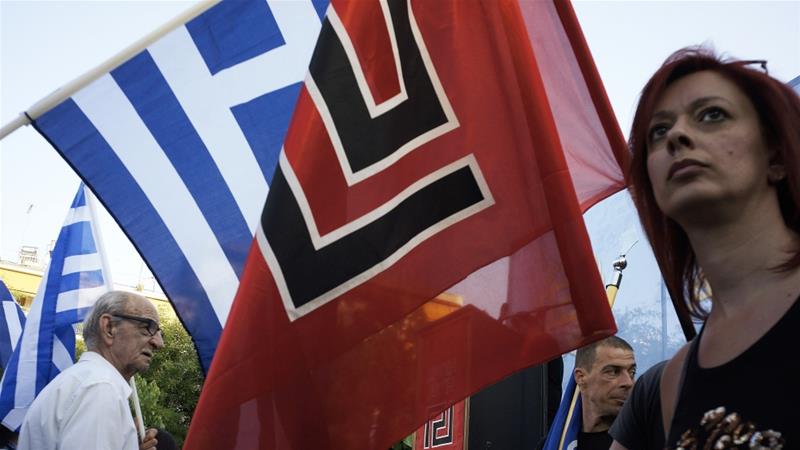 Seven years and four elections since first entering Greece’s parliament, the neo-fascist Golden Dawn party has been knocked out of the crisis-hit country’s legislature.

With nearly all of the ballots in Sunday’s general election counted, Golden Dawn had gained 2.93 percent of the votes, failing to clear the three percent hurdle needed to secure any seats in the 300-member House.

Kyriakos Mitsotakis, who was sworn in as Greece’s new prime minister on Monday after his centre-right New Democracy party won a landslide over incumbent leftist Syriza, described Golden Dawn’s failure as “a great victory for Greek democracy”.

The election came as Greece struggles to recover from nearly 10 years of financial hardship that saw its economy shrink by a massive 25 percent and its political system upended.

During the crisis, Golden Dawn evolved from a negligible, violent neo-Nazi group into Greece’s third-largest political force, denouncing the country’s bailout deals and adopting an openly hateful rhetoric against migrants and refugees. The far-right party had 18 legislators in the outgoing parliament, having won 6.99 percent of the votes in the last national election, in September 2015.

But its weakening became apparent in May’s European Parliament polls, when it received 4.87 percent of the vote during an election that saw Greek Solution, a newly formed party on the far right, gain 4.18 percent.

Golden Dawn also faces potential legal problems. A trial at which one member is accused of murdering anti-fascist rapper Pavlos Fyssas in September 2013, and several prominent party officials including leader Nikos Mihaloliakos face charges of operating a criminal organisation, is wrapping up, and any convictions would hit the party hard.

In a fiery concession speech on Sunday evening, Mihaloliakos admitted the party’s defeat but declared provocatively that “Golden Dawn is not finished”.

“We are sending a message to our enemies and so-called friends: Golden Dawn is not finished; get over it. The fight for nationalism continues. We return where we became strong: on the streets and squares, in a tough struggle against Bolshevism and the coming savage capitalism,” Mihaloliakos told a crowd of supporters.

Mihaloliakos ended his speech with his customary “Hail victory!” – a direct reference to the Nazis’ “Sieg heil” salutation.

Founded in 1985, Golden Dawn was known for years as a collection of violent youths obsessed with military bearing and ready to attack political opponents and then increasingly migrants and refugees, as Greece became a destination for the latter.

But as Greece’s economic crisis unfolded, the party achieved a breakthrough in 2010 municipal elections, getting its first elected officials and scoring best in neighbourhoods with a heavy migrant presence.

It won its first seats in the legislature in 2012, and in four successive national elections held from 2012 to 2015 it got about seven percent of the votes.

Its high point came in the 2014 European elections, when it polled 9.39 percent to become Greece’s third-largest party – a position it retained national elections held in January and September 2015.

Despite the poor election showing on Sunday, many doubt Golden Dawn will shrink back to its previous marginal status. In the European elections, the party’s share of the vote among 17- to 24-year-olds was about 13 percent.

Meanwhile, Golden Dawn’s failure to elect MPs does not mean a complete defeat of the far right in the country as Greek Solution secured 10 seats.

It also wants to “send Non-Governmental Organisations away” and “immediately deport” irregular migrants while still “offering asylum to those who genuinely need it”, according to its manifesto.

The article was published on: www.aljazeera.com